Peacemakers bringing communities together in coexistence

A Palestinian and an Israeli who have succeeded in bringing the communities of Tzur Hadassah (secular and national-religious Israeli Jews) and Beitar Illit (ultra-Orthodox Israeli Jews) together with the town of Husan (Palestinian Muslims) in a remarkable cultural transformation which has reversed decades of animosity, to instead establish strong bonds of friendship and mutually beneficial economic relations.

IIE awarded the 16th annual $10,000 IIE Victor J. Goldberg Prize for Peace in the Middle East to Mohammed Khatib and Emily Schaeffer Omer-Man, two Palestinian and Israeli lawyer-activists who have joined together to create and lead the first Palestinian-Israeli joint legal project dedicated to challenging systematic violations of human rights in courts worldwide. The Prize recognizes Khatib and Omer-Man for their work through the courts to increase access to effective remedies for Palestinians related to the expansion of settlements and restrictions on land use and water access. Their work includes addressing existing violations as well as deterring future violations through strategic litigation in Israel, Palestine, foreign and international legal systems.
The two prominent attorneys have a long track record of joining together to advocate for holding government and corporate actors accountable for their complicity in Palestinian rights abuses. In making the presentation, Vic Goldberg said “We commend their commitment to use legal means and advocacy to produce the fundamental fairness that is necessary for a sustainable peace between Israelis and Palestinians, and is a precondition for peace throughout the Middle East.”

IIE awarded the 15th annual $10,000 IIE Victor J. Goldberg Prize for Peace in the Middle East to Yuval Roth and Naeem Al-Baeda, an Israeli and Palestinian who have joined together to lead Road to Recovery (RtR), an organization of volunteers who drive Palestinians, mostly children, from their homes in the West Bank or Gaza to hospital appointments in Israel for urgent medical treatments that are not available in their home communities.

While Road to Recovery is apolitical, its leaders believe that compassionate assistance presents a unique opportunity for Palestinians and Israelis to get to know each other, creates hope in this troubled region, and can contribute, at least in small part, to peace between the two peoples. In addition to providing transportation at no charge to the patient, the project also provides medical equipment for those in need and organizes special recreation days for patients and their families.

The Religious Peace Initiative seeks to create the foundation for peace in the region by involving influential Jewish and Muslim religious leaders in efforts to resolve the ongoing conflict. Crucially, the initiative engages religious leaders who are considered to be extremists or who appear to reject conciliation and peace efforts.

Roie Ravitzky is the director of the Religious Peace Initiative and Raed Badir is the director of the Adam Center for Interreligious and Intercultural Dialogue in East Jerusalem and Kfar Kassem. Together, they are working to bridge divides in religious leadership in the region and expand the existing coalition of leaders who engage in constructive dialogue together.

PeacePlayers brings Jewish and Arab women from the Arab and Israeli communities of Tamra and Naharia who might otherwise have few opportunities to meet together through basketball. As the coaches of this program, Shadi Khatib and Dor Dayan seek to build bridges across communities in conflict through sport.

Through their efforts, the team has made extraordinary strides in building trust and friendship across the two communities. The team also made history in the 2016-2017 season as the first Israeli and Arab women's team to advance to the National Division after winning the Regional Championship.

Since the program's inception, participants have gone on to pursue notable and important work bridging divisions across communities. Alumni of the program developed seed exchanges for Palestinian and Israeli farmers, and helped connect a Palestinian town to the national electric grid, among many other accomplishments.

IIE awarded the 13th annual IIE Victor J. Goldberg Prize for Peace in the Middle East to Sarah Stone and Montaser Amro, an Israeli and a Palestinian who have joined together to lead a new Pathways to Peace program through Kids4Peace.

Kids4Peace recently announced its new mandate to broaden its focus from interfaith education to empowering a movement for change, and created the new Pathways to Peace program to engage youth and families from neighborhoods not previously engaged in peace efforts. As co-directors of this program, part of a greater USAID-funded initiative called Interfaith Jerusalem, Sarah and Montaser worked together to create a brand new curriculum to prepare Israeli and Palestinian youth to be influential leaders for peace within and between their communities. In the first year of the Pathways program, Sarah and Montaser are already halfway to their goal of bringing 288 new families with 6th and 7th grade children into the six-year sequence of Kids4Peace activities. The goal is to advance an agenda for visible peace in Jerusalem and celebrate the religious diversity of the city – marked by reduced violence, increased social cohesion and equitable treatment for all its residents – which they view as a key step toward peace in the Israeli-Palestinian conflict.

Sarah Perle Benazera and Ohood Murqaten, Co-Chairs of the YaLa Young Leaders Core Leadership Group, received the 2016 IIE Victor J. Goldberg Prize for Peace in the Middle East for their roles leading the charge for peace and positive social change in their communities and in the region. YaLa Young Leaders is the broadest and fastest-growing Middle East peace movement today, with nearly a million members from all across the MENA region.

YaLa is an online movement led by young adults, for young adults, focusing on dialogue and engagement as a means to securing a safe, productive, and peaceful region, capitalizing on the catalyzing power of social networks, media and technology to lead their generation to a better future. Sarah and Ohood coordinate a diverse Middle Eastern team of administrators who manage the YaLa Young Leaders' Facebook page, reaching an average of 65,000 people per day. During times of high tension in the region, the YaLa page provides a safe environment for young people on both sides to search for a different point of view on the situation, and to find partners for dialogue. 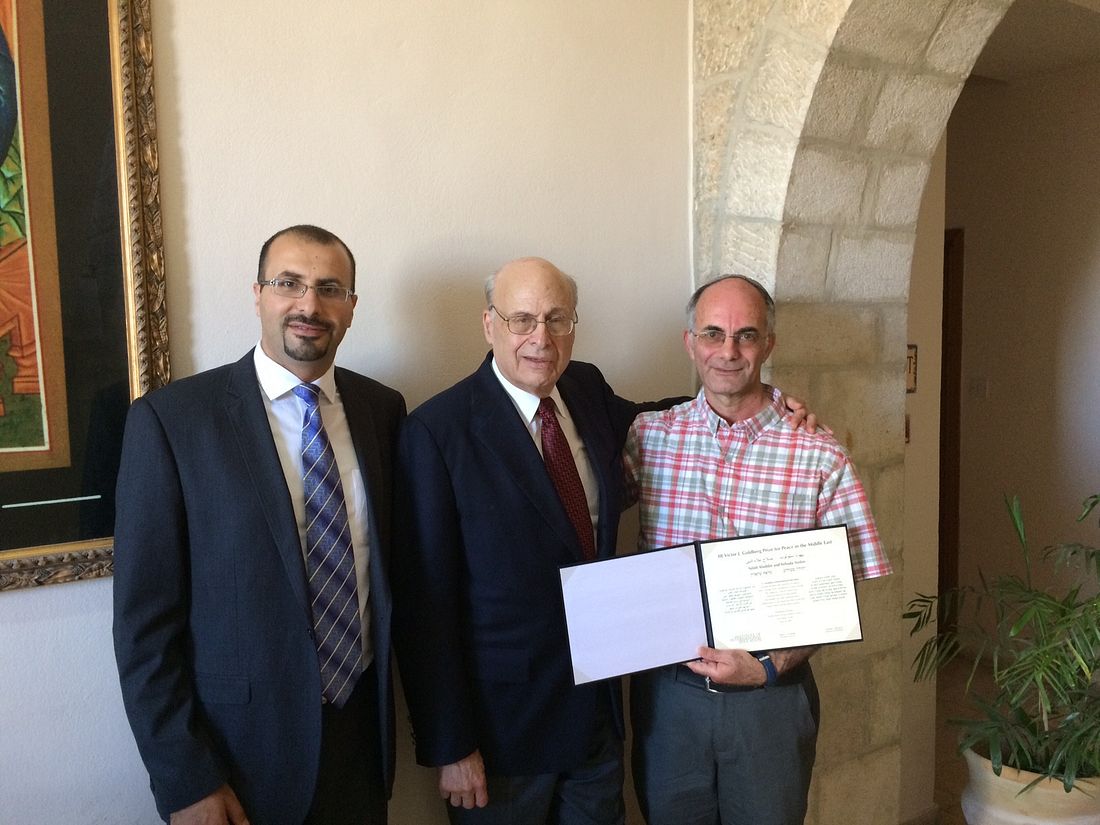 IIE presented Yehuda Stolov and Salah Aladdin of the Interfaith Encounter Association with the 11th annual IIE Goldberg Prize in 2015. The award recognizes their efforts in leading grass roots interfaith dialogue and cross-cultural study groups that bring Jews, Muslims, Christians and Druze together on a very personal level to share their cultures, beliefs, and traditions across religious and cultural divides.

In 2013, the 9th annual IIE Victor J. Goldberg Prize for Peace in the Middle East was presented to Murad Alyan and Eli Beer, two leaders of United Hatazalah. The prize was presented at a ceremony held at the American Center in Jerusalem, hosted by IIE in cooperation with the U.S. Embassy in Tel Aviv.

In 2012, the 8th annual Victor J. Goldberg IIE Prize for Peace in the Middle East was presented to Attorney Hassan Jabareen, the founder and General Director of Adalah – The Legal Center for Arab Minority Rights in Israel, and Attorney Dan Yakir, the Chief Legal Counsel at The Association for Civil Rights in Israel (ACRI). The prize was presented at a ceremony held at the American Corner/Arab Jewish Community Center in Jaffa, hosted by IIE in cooperation with the U.S. Embassy in Tel Aviv.

In 2011, the 7th annual Victor J. Goldberg IIE Prize for Peace in the Middle East was presented to Amal Elsana Alh’jooj and Vivian Silver, Co-Executive Directors of the Negev Institute for Strategies of Peace and Development (NISPED), at a ceremony at the Peace Tent (Al Sa’ada) in the Arab Bedouin city of Rahat on June 21, 2011.

In 2010, the 6th annual Victor J. Goldberg IIE Prize for Peace in the Middle East was presented to Bassam Aramin and Avner Wishnitzer, two founders of the group Combatants for Peace (CFP), at a ceremony near Beit Jala on October 13, 2010.

In 2008, Aziz Abu Sarah and Lily Yaffe received the Goldberg IIE Prize for their work with The Parents Circle Family Forum, conducting educational activities that draw on their own very moving personal stories and the experiences of hundreds of bereaved Palestinian and Israeli families who have lost immediate family members due to the violence in the region. 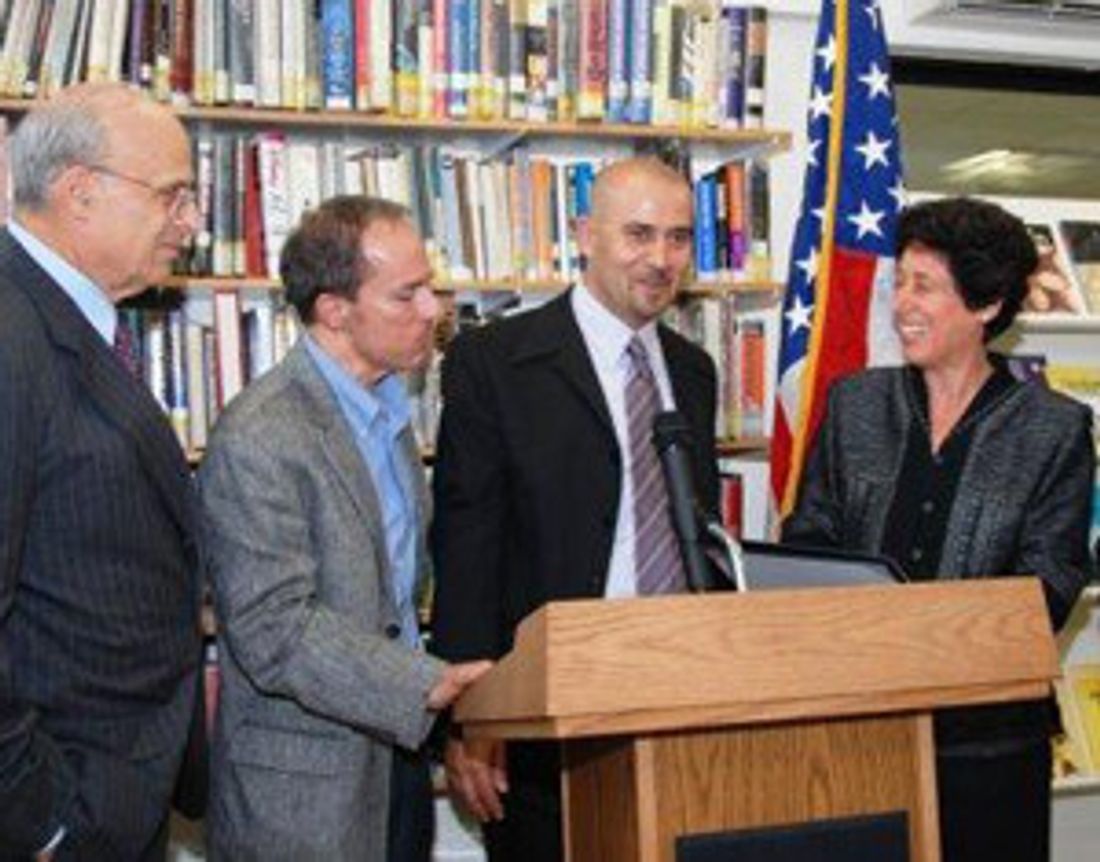 In 2007, U.S. Deputy Chief of Mission Gene Cretz joined IIE in presenting the third annual Victor J. Goldberg IIE Prize for Peace in the Middle East to Amin Khalaf and Lee Gordon, two veteran Israeli educators, at a reception at The American Center in Jerusalem.

The award recognizes their pioneering work in co-founding the organization Hand in Hand in 1997, and their success over the past decade in building and developing three bilingual and multicultural schools where 750 students from kindergarten through twelfth grade are currently co-taught by Arab and Jewish instructors and courses are presented in both Hebrew and Arabic. In the 2007-08 school year, Hand in Hand, which began with 50 students in 1998, will expand to serve over 900 Jewish and Arab children in four schools. A decade ago, the two co-founders recognized segregated schools as a barrier to peaceful coexistence, and they joined together to invent a unique multicultural school model to support a stronger civil society in Israel.

In 2006, U.S. Ambassador Richard Jones presented the second annual Victor J. Goldberg IIE Prize for Peace in the Middle East to Ibrahim Abu Shindi and Hadas Kaplan at a reception at the Arab-Jewish Community Center in Yaffo.

The award recognizes their pioneering work in creating an innovative and sustainable community organization that works to promote inter-cultural dialogue, co-existence, and community empowerment in its mixed Jewish and Arab Israeli neighborhood.

Mr. Abu Shindi and Ms. Kaplan founded the Center 13 years ago to preserve ethnic, religious, and national individuality while fostering better understanding, tolerance, and democratic values among diverse populations. The Center has become a paragon of co-existence between Jewish and Arab populations in an urban setting, providing a venue for both facilitated and unmediated encounters between members of Yaffo’s various ethnic and age groups, including children from Jewish and Arab kindergartens, elementary and high school students, and adults. It also runs job skills training and school enrichment outreach programs in the community.

In 2005, at a reception at the American Center in Jerusalem, U.S. Ambassador Daniel Kurtzer presented the inaugural Victor J. Goldberg IIE Prize for Peace in the Middle East to Professors Dan Bar-On and Sami Adwan for their pioneering work in engaging Israeli and Palestinian teachers and teenagers in changing entrenched and polarizing attitudes on both sides of the region’s conflict.

A prestigious international committee judged the shared history project, “Learning Each Other’s Historical Narrative,” to be most successful in bringing people together and breaking down the barriers of hatred toward “the other,” and selected Professors Bar-On and Adwan, co-directors of Peace Research Institute in the Middle East (PRIME), to receive the $10,000 Prize this year.

In an innovative and collaborative approach, Bar-On and Adwan brought together teams of Palestinian and Israeli teachers and historians to develop parallel narratives of key historical events as viewed by the Israeli and Palestinian communities, translate them into Hebrew and Arabic, and test their use together in both Palestinian and Israeli classrooms. Using this new shared history booklet, 15 and 16 year old students in each school system will be able to read the history of the other community alongside their own, coming to understand the historical perspectives and contexts that shape both communities.

The goal of this new project of PRIME (Peace Research Institute in the Middle East), the organization that Bar-On and Adwan direct, is to “disarm” the teaching of Middle East history in Israeli and Palestinian classrooms, to advance the cause of understanding and reconciliation between peoples and ultimately create a social infrastructure capable of sustaining formal political agreements in the region. The booklet has also been translated into English, French, Italian and Spanish languages, and has begun to be used widely in several European countries.